I just got back from visiting my home town of Woodbridge in Suffolk, getting some fresh air, visiting my parents and catching up with some childhood girlfriends. It was a nice break from staring desperately at my computer screen whilst I rummage through online employment agencies, sending out the odd application and blindly hoping that my CV gets picked out from the pile of thousands that look just like mine. It's a bit of a depressing time in the UK right now, unemployment has hit its highest level in 17 years and I know that I'm not going to have my pick of jobs. Not to mention that I'm not really sure how to get employed in this country. It's been a long time. Converting my American resume into a British curriculum vitae has taken me longer than it should have, though to be honest, that's mostly because I spent ages messing around with different fonts and borders trying to make it look pretty.

I know, I know... why get a job when I'm going to be a brilliant upholsterer and make sad chairs feel happy again? Well, I do need capital to get started. And for that, I do need a job. Preferably one that will give me enough time and energy left over to begin work on my upholstery business. I have an appointment with a recruitment agency tomorrow, so that's a step in the right direction. Which leaves me plenty of time to daydream about which hand-tools I'm going to buy, and fabrics and piping, and all of the world weary chairs that are out there, looking for a new lease of life. I'm pretty excited to get started.

I'm also excited about my new sewing machine. It's not an industrial machine, which is ultimately what I will need, but a really sweet, basic Singer 337. It was built between 1964-65 and is still in perfect working order. It just needs a bit of a tune-up. The best bit about it is that it's not only a joy to look at (the colour is duck-egg blue!), but it only cost me £10 at the Moss End Car-Boot Sale in Bracknell. I'm going to use it for piping and making small cushions. Doesn't it look jolly?


And look, it has its own carrying case. In DUCK EGG BLUE!! I can tell you're jealous.

I am going to keep my eyes peeled for some vintage fabrics when I'm out and about, so that I can get my feet wet on my new machine by making some fun throw pillows. I did pick up a vintage tea-towel at another car-boot sale, and I think I'm going to turn that into a throw pillow. Something sort of like this:


The really cool thing about the tea towel I found is that it's from my neck of the woods... well, almost... It's a souvenir tea-towel of an area known as the Norfolk Broads. Norfolk being the neighbouring county to my home county, Suffolk. Which isn't a big deal, unless you are my dad and have been engaged in a life-long rivalry between Norfolk's football team, Norwich City, and his home team, Ipswich Town.

It's just as well that my dad isn't a throw pillow sort of guy. 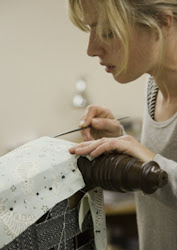